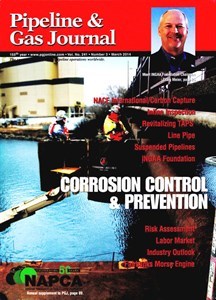 Integrity projects are complicated enough when they involve locating anomalies along a buried pipeline that will then need to be excavated, evaluated and repaired. That factor increases significantly when the pipeline involved is connected to a heavily traveled motor bridge over a busy commercial river adjacent to an active railroad spur in a large metropolis like Chicago – in the dead of winter.

A large liquid pipeline operator needed to replace corroded hangers that were supporting its pipeline on the bridge so that company turned to Midwestern Contractors and Orbital Engineering for a solution.

The liquid pipeline is suspended over the Grand Calumet River on the 130th being held in place by 19 hangers. The hangers were weakened by corrosion from water and road salt. Further complicating matters the City of Chicago needed to do work on the bridge bearings and this required jacking the bridge up by as much as 0.50”.

The solution involved detailed planning, and clear communications between contractors, engineers, pipeline owners and regulators. To insure safety, success and to protect the pipeline and bridge assets all of the issues involving fabrication, welding, painting, bolt and torque specifications, lift plans, job site analysis, were worked out in advance.

While the engineering firm worked on the design and drawings for the hangars, Midwestern Contractors was charged with developing the construction plan, securing a lease for access and lay down area and securing permits from the Corp of Engineers, Illinois Department of Natural Resources, and U.S. Coast Guard. After almost two years of work the necessary permits were secured, the hangers were designed and fabricated, and both the construction plan and sub-contractors were in place. A kick-off date was then set for January of 2012.

The logistics proved to be challenging. The main span had to be accessed by barge and the approaches to the East and West required scaffolding. On the West side the scaffolding had to bridge a rail spur to prevent interruptions in service to a pig iron yard. Scaffolding was required on the East side as well but land access proved unfeasible so the West side was also used as a staging area for the portion to be barged across the river and off-loaded for assembly on the East side.

Midwestern crews started the project on a bitterly cold January 15th equipment, including, a 90 ton crane, an aerial man lift with a 70’ reach, material trailer, heated construction trailer, generator, rescue boat and rigging materials to begin work on the 13 main span hangers over the river. The scaffolding for the land work was being constructed concurrent to this work.

Each existing hanger was originally riveted in place for over 60 years ago. These rivets had to be cut off flush and punched out with hydraulic jacks, one rivet at a time. The approach hangers were to be cantilevered off of I-beams placed onto the bridge structure. This was a laborious process requiring, drilling, alignment of the I-beams and fastening with structural bolts.

Each hanger was adjusted to take a proportionate load of the pipeline. On March 15th very little vibration in the pipeline as the bridge flexed under loads. With the new zinc rich coatings and the use of stainless steel components, the 12” pipeline has been repaired and made secure for years into the future. 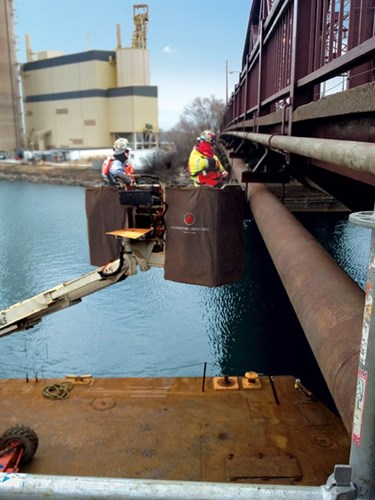 There are many variables that can negatively affect the progress and the outcome of any project. Some are physical like snow and wind; others are abstract like the words on a permit. In every case a competent contractor should build relationships with the owner of the asset, his customer, the engineers and the regulators. The result will be a successful project completed on time that all parties can be proud of.